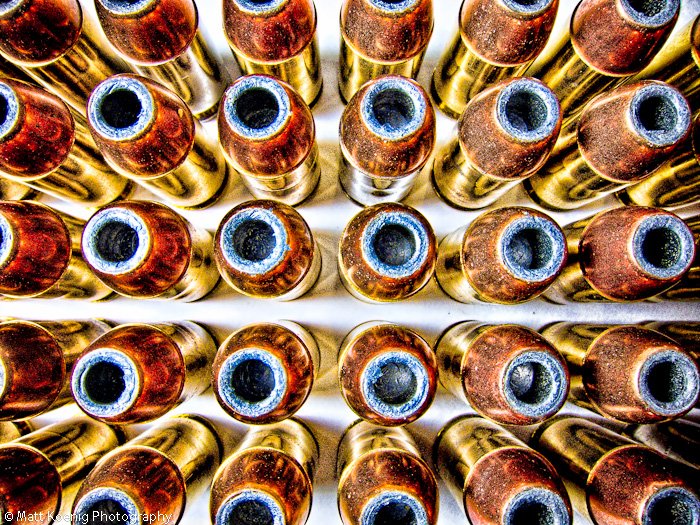 We’re counting the days of Project 365 down now.  We’re into the double digits.  I’d really like to be taking some outdoor shots but with the change in time and the shortening days I find that when I get out of work the sunlight is gone.  Maybe I will try some night time city shots.  Regardless today’s shot is a studio shot.

I’ve owned firearms for many years now.  I originally purchased a Rugar P89 9mm with several large capacity clips.  It’s a big gun and fun to shoot, but it’s big.  Next I bought a Springfield Armory .45 but it never really shot well.  I sold it to a friend awhile back.  He sent it into the manufacturer and they found something wrong with it and I guess it shoots great now.  Finally I purchased a Glock 22 a .40 caliber handgun that is probably my favorite to shoot.  It’s compact and has a great grip and feel to it.

Looking through some old boxes I discovered a bunch of ammunition that I had forgotten about.  A few boxes of .45 shells and some cleaning supplies.  I actually haven’t shot any of these guns in probably over 10 years.  I’ve always enjoyed target shooting.  Some people think shooting is easy that all you do is just aim and squeeze the trigger but it’s really not so simple.  Like anything in life it takes practice to get good at it.

Is there something that you enjoy doing but haven’t done in many years?