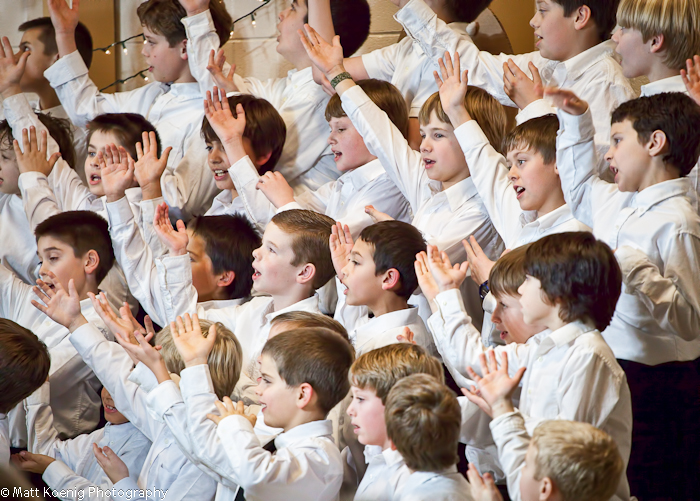 My son joined the choir at school which really surprised me as he has always been really shy and never one to be in the spotlight.  In fact I can’t remember ever hearing him sing or even express an interest in singing.  But he joined which was awesome.

They had so many kids join that they decided to split the choir into a girls choir and a boys choir.  This night was the Christmas concert so we dressed him up in the required black pants and white shirt and went down to the school for a great evening.

The kids were amazing.  First up was the girls choir then the boys.  My son stood up there and sang his heart out.  He was really having a good time and I was so proud of him.  He’s in the second row from the bottom, third kid from the right.

I shot the whole night with the Canon 5DII and the Canon 70-200 f/4L lens.  Since it was inside a gym the lighting was not that great.  Because I was shooting RAW I kept the white balance on auto because I knew I could adjust this later.  My f/stop was f/4 to bring in as much light as possible so that I could keep my shutter speeds up and my ISO as low as possible.  As it was I still had to shoot at ISO 1600.  The good thing is that the 5DII is great at high ISO and when coupled with the Topaz Labs deNoize plug-in I don’t worry about shooting at such high ISO anymore.

The sacrifice for shooting wide open is that the depth of field is reduced.  This means that you really need to nail your focus.  I turned my auto focus to the center point to make sure I was getting the shot focused right where I wanted it.  This photo was shot at ISO 1600, shutter speed of 1/160th second and an aperture of f/4.