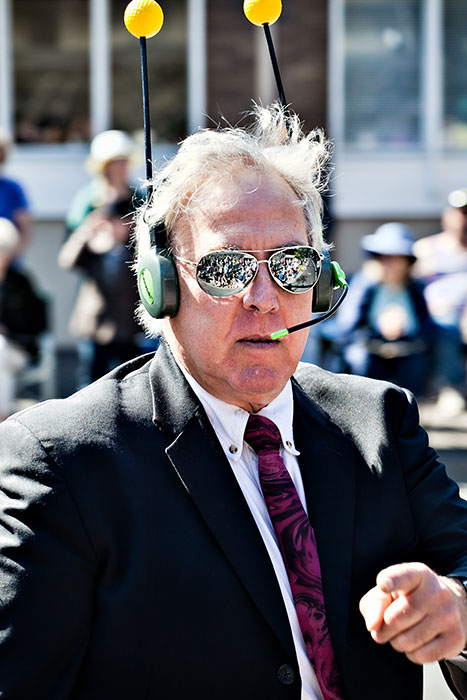 This weekend was the annual Eugene Celebration, a time to celebrate all that is unique and interesting about Eugene.  On Saturday there was a parade which in past years has always offered up an eye-full of unique, humorous, political and plain Eugene sights.  This year was no different.

We arrived a bit late and missed the first few entries of the parade but we caught most of it.  I’ve posted the highlights of theEugene Celebration Parade on my Flickr site.  There was Paul’s Bicycle Way of Life with some acrobatic bike riding and colorful apparel.  Then there was Sundance a local organic food store with members dressed up as carrots and other healthy vegetables.  There were music groups, marching bands and the Slug Queen who presides over the whole celebration.

The guy in todays photo told me with a serious look on his face that there were no photos allowed.  I kept shooting and captured the crowd (including myself) in his mirrored sunglasses.

There was a giant pedal powered vehicle with wheels taller than me.  The giant Twist and Shout Slug is always a treat to see.  There was Congressman Peter DeFazio pushing his standard wheel barrow picking up slime.

There was also lots of statements being made from “No more old growth logging on public forests” to ending the wars.  Peace, tolerance and respect for others were big themes.

There was Mobility International with a whole group of wheelchair bound members sporting flags from many nations of the world.  Local school played a big part in the parade perhaps nervous about the further school funding cuts being passed down to the local level.

Lots of sporting clubs as well from rowing, hockey, Emerald City Roller Girls, fencing and gymnastics.  Darth Vader and the 501st Legion Cloud City Garrison marched through with blasters and light-sabers at the ready.

Dancers, musicians, drummers, flag bearers, electric vehicles, bicycles, the list goes on and on.  Finally no parade in Eugene would be complete without the Deathmobile made famous in the movie Animal House which was filmed in Eugene.  I kept waiting for the rampage to begin as they drove slowly past.  I could almost hear John Belushi yelling “Toga! Toga! Toga!”

Check out the photos for your own glimpse of the parade festivities.  I’ll be posting more as I process them.