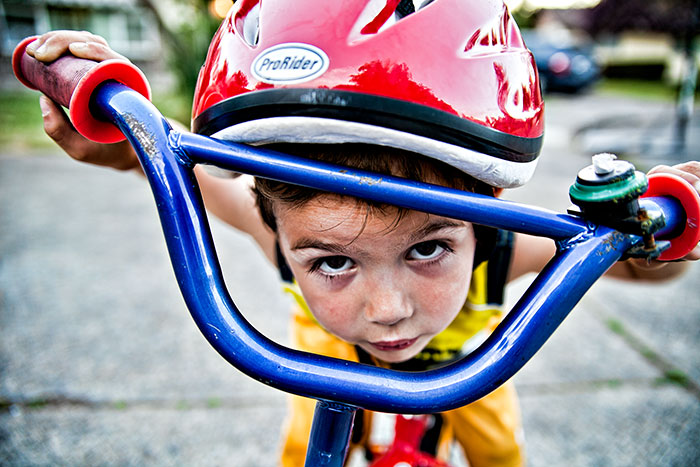 Sometimes I like to mix in a few non-food shots.  This is my son the daredevil.  He is 4 years old and just learned to ride a bike without training wheels a month ago.  Since then he has graduated to riding with one hand, riding with no feet on the pedals and finally the pièce de résistance where he gets going as fast as he can and jumps off the bike letting it go riderless down the street.  Should I be worried here?

Maybe so as I recall some of the crazy things I did on a bike growing up.  Let’s see, first there were the speed rides down our hill standing on only one pedal with both feet while crouching low to the ground.  Then there was the standing on the seat while cruising down the same hill.  Of course I can’t forget the 5 foot ramps I built to jump my bike off of.  And all these stunts were done over the years without breaking a single bone.  Lucky?  Extremely!

I see a lot of myself in my son when I was that age.  He’s fearless and willing to challenge himself to try new things no matter how crazy they may seem or how much Mom makes that face.  I started thinking today about where my sense of being fearless went.  I had it as a kid but it seems the older we get the less courageous we become.  We tend to shy away from doing things that might be considered risky.  And yet these are often the very things that make us feel the most alive.  How many times have you said to yourself, “Man if wish I had done that”?  Why didn’t you?

When I look at decisions I’ve madethroughout my life I can see that many of them were the easy or safe choice.  They didn’t have a lot of inherent risk associated with them.  Rather than choosing the side road that could have rocked my world with dips and jumps and airborne acrobatics I chose to travel the 8 lane paved super highway complete with 5 star rest areas.  I’m not saying there is anything wrong with that but sometimes we need to get a little fearless and take a chance on the things we really want to do.

A while back I wrote a post for my friend Sean Ogle of Location 180 entitled “Every Challenge is an Opportunity”.  In it I talked about things we can do to overcome fear and live a fulfilling life doing the things we really want to do.  Check it out if you get a chance.

The world awaits you with excitement and fulfillment and an open door policy.  All you have to do is walk through that door.  Are you fearless enough to do that?