We never intended to be walking the trail in darkness so how did we now find ourselves blindly stumbling down the now barely visible path? Late in the day on Sunday we had decided to do a family hike up Spencer Butte in Eugene for some well needed exercise. We pulled into the parking lot and realized that half of Eugene had the same idea as the parking lot was full. So we decided to take the longer way and backtracked to a different trail head which was a bit longer of a hike but where there were a few parking spaces free.

Spencer Butte is a noticeable landmark on the cities southern border and tops out at 2055 feet. The last half mile or so is a scramble over rocky outcroppings but the rest of the trail winds through beautiful green forests. From the trail head we made our way up through a field of brown grass and into the edge of the forest. Here there were old-growth trees towering overhead. The trail was wet and muddy from recent rains but this only made it more enjoyable for my kids. The trail had several switchbacks as we climbed higher and higher through the forest where breaks in the trees offered views of the city below.

Finally we reached a junction in the trail and had a decision to make. We had just hiked 1.3 miles and the summit was still another 1.25 miles. The sun was quickly sinking and I really wanted to get to the top and capture some sunset photos. We took a quick family poll and the vote was to continue to the top. In the back of my mind I made a mental note that we didn’t bring a light with us for the hike back but this thought was quickly overruled by my desire to get a good sunset shot.

After a bit more hiking and some time to allow for my lungs to catch up to the rest of me we made the summit. We had just missed the setting sun but the glow was beautiful and made for some stunning photographs. 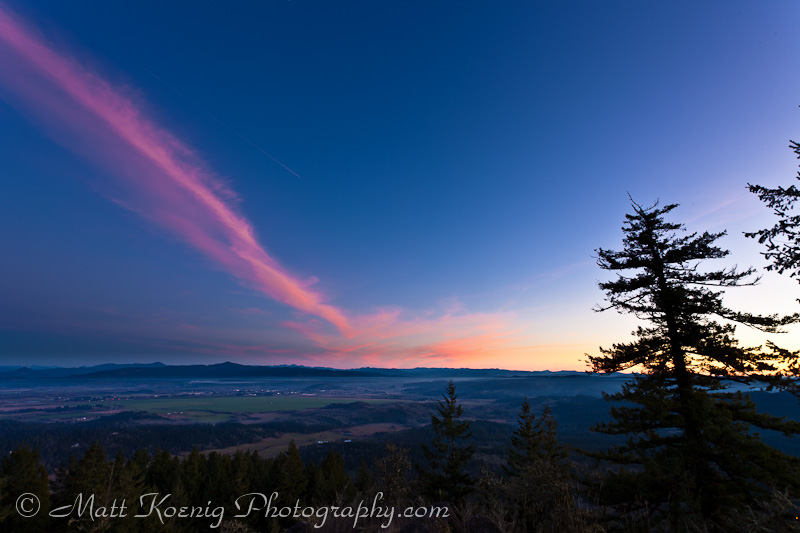 The view of the afterglow from the setting sun from the top of Spencer Butte.

There were still lots of people at the top all watching the sun first disappear and then finally the afterglow melting away into the deepening blue color of dusk.  It was dark now and we realized we still had to traverse the rocky scramble and then 2.5 miles of trail in the dark without any light except for the light of the full moon. 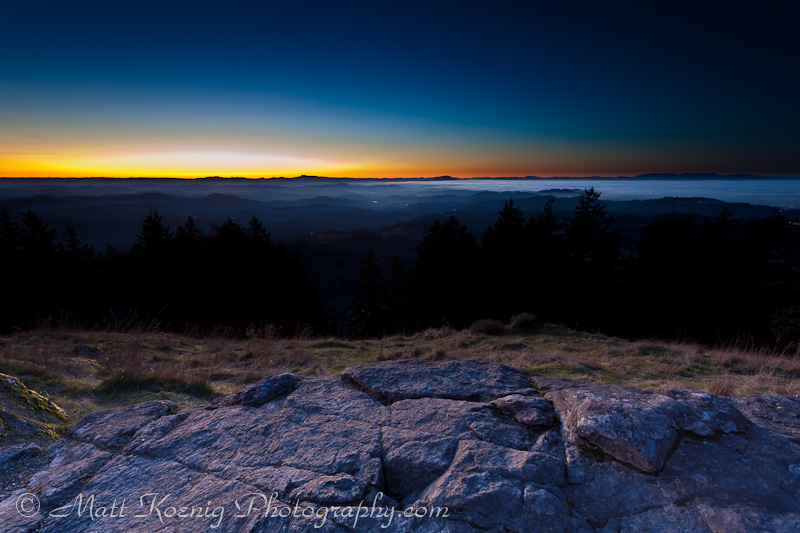 The afterglow of the setting sun as seen from the top of Spencer Butte.

My wife and kids started down the trail as I stayed a few more minutes to capture more images of the city lights below.  It was an amazing view with the fog bank rolling in over the city and the lights of the streets glowing through in patches.  The light reflecting off the fog as incredible and I only wished I had more time to capture it, but my family was somewhere along the trail and that was where my priority lay.  I quickly snapped off a few more shots and packed up my gear.

The view of the city below with a fog bank rolling in. I love the lights reflecting off the fog and glowing through in spots. Such an incredible view!

I caught up with the family and we carefully made our way down the rocks to the trail below with the help of other hiking down who had a nice little flashlight built into their cell phone.  But I found the light to be a distraction and took away from my eyes own ability to adjust to the darkness.  It was a full moon and there was actually plenty of light to see by.  As we made our way down the trail and toward our waiting car I secretly enjoyed the experience.  This was an adventure and how life was meant to be lived.  I felt alive!  My kids were enjoying it as well and seemed unfazed by the darkness, navigating the dark trail like seasoned pros.

A vigorous five-mile walk will do more good for an unhappy but otherwise healthy adult than all the medicine and psychology in the world.  ~Paul Dudley White

It seemed like hours before we finally traversed those last miles of trail and began to see the first hints of civilization glimmering through the trees.  We had survived!  As we arrived safely at the parking lot and unlocked the car I couldn’t help but reminiscence about my days working as a wildlife biologist and all the early morning hikes in the dark doing marbled murrelet surveys.  I gave thanks that my kids could experience the simple joy of hiking a trail in the quiet darkness of the night.

I only went out for a walk and finally concluded to stay out till sundown, for going out, I found, was really going in.  ~John Muir

If you enjoyed this article please share it with a friend.