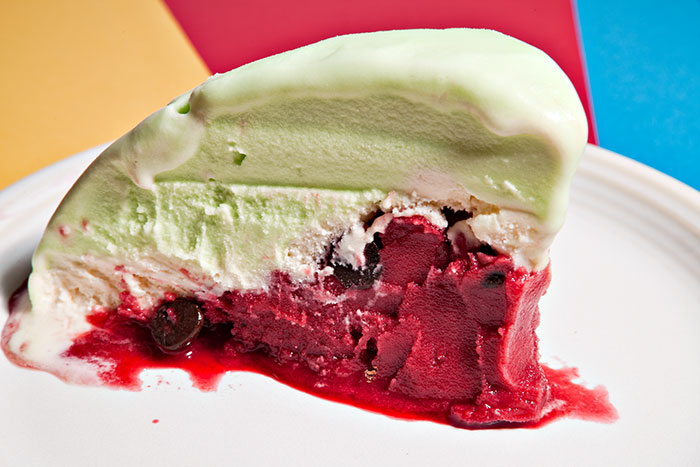 Just when you thought that ice cream couldn’t get any better my wife goes and makes this delicious treat.  The concept here was to make an ice cream dessert that looked like a slice of watermelon.

To create this treat she used a semi-circular pan and layered the ice cream together.  The outer layer which represents the watermelon rind is key lime ice cream.  Next is a thin layer of vanilla to get that white portion between the sweet juicy inside and the rind.  And finally the red inside is raspberry ice cream with chocolate chips to represent the watermelon seeds.

Here are a few things I learned while photographing ice cream which will probably translate to photographing anything that melts quickly.  First attempt I used a room temperature plate and quickly discovered that the ice cream melted almost immediately creating a runny mess on the plate (you can see it melting already on this shot).  To account for this I chilled the plate in the freezer bringing it to the same temperature as the ice cream.

The second thing is to use a stand-in first and get your lighting and camera settings dialed in before you start shooting.  Even with a chilled plate the ice cream started melting fast (it is Summer).  Taking time to dial in the lighting resulted in a sub-par product.  So for the second attempt I made sure the lighting and positioning were exactly how I wanted it.  Then I just had to replace the prop with the real deal and start shooting.  Good times!