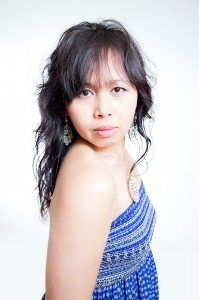 So for Valentine’s Day I wanted to take a few photos of my wife.  So I turned the living room into a temporary studio (as I have done many times before) and got all my equipment setup.

This night I decided to shoot with the 5D MarkII and a Tamron 28-75 F/2.8.  I used 2 flashes, one bare bulb aimed at a white wall.  I put it on full power and wide spread so that I could blow the wall out and make a nice clear white background.  The other flash was on a stand in a shoot-thru umbrella up high and behind the camera as well as slightly to the right.

Both flashes were triggered with Cactus v4 wireless flash triggers.  They work fantastic in my experience and are inexpensive.  I purchased mine from Gadget Infinity and I couldn’t be happier with their service.  They shipped quick and the flash triggers have worked just as advertised.

I also used a tripod and wireless remote.  This is one shot from that shoot that I really like.  I still need to work on my post processing techniques.  I’ve been trying to do more work in and get more familiar with Lightroom but for this image I used Photoshop CS4.  I always shoot RAW so my first step was to open it up in ACR (Adobe Camera RAW).  My workflow consists of adjustments to exposure, brightness and contrast as well as clarity.  Here I adjusted the exposure to brighten the image considerably.  Some of the highlights clipped as a result so I used the recovery tool to restore this detail.  I then increased the contrast a bit and applied a bit of negative clarity to soften the midtones.  Finally, I added a slight bit of sharpening.

After pulling the image into Photoshop I just save it off as a TIFF and JPEG as at this point I was happy with the result.

Coming up: I’ll be starting my Project 365 on Saturday.  If you are not familiar with Project 365 it is where you take and post a photo a day for an entire year.  This is going to be a BIG undertaking but the payoffs are going to be so cool.  Imagine capturing a moment of your life every day for an entire year and being able to look back on those moments.  I’m both excited about it and apprehensive.  Excited to finally be doing it but apprehensive about the dedication it is going to take.  I hope you will be with me every day to keep me on task.  More to come on this starting Saturday.