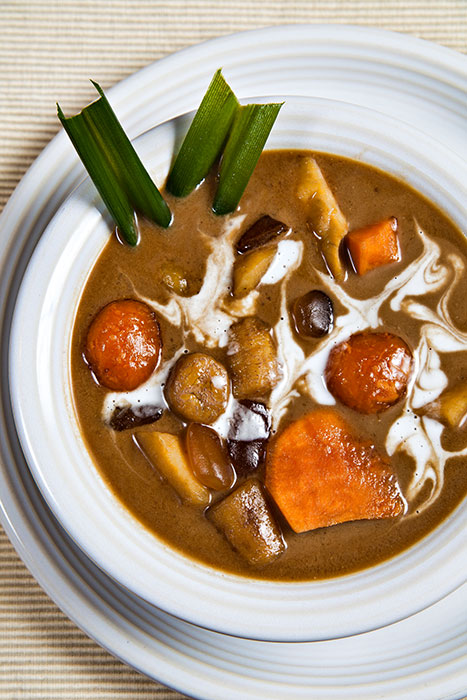 Kolak pisang is an Indonesian dessert made from a base of palm sugar and coconut milk.  Bananas (or plantains) can be added to create kolak pisang (pisang = banana in Indonesian).  This recipe uses bananas, sweet potato (ubi jalar) and palm seeds (toddy palm fruit).  Various fillers can be used.  Sometimes mung beans are used as well as jackfruit.

No setup shot today but I will outline the lighting I used since it was very simple.  First a couple of tips that I discovered when trying to plate this dessert.  When I first added the liquid into the bowl I discovered that the potatoes and bananas didn’t stick up like I wanted them to.  So I tried putting some plastic lids into the bowl first but they were too light and floated.  So I used a slice of papaya (yes papaya) to provide some lift to the bananas and potatoes.  This effectively let them sit up in the liquid a bit more and I think made for a better photo.

Second, as you can see many of the items in the dessert are the same color so I added some cut pandan leaves to add a bit of contrasting color.  I had taken a few shots without the pandan leaves and they definitely were not as good as with the leaves.

For the lighting I used a Canon 580EXII flash at half power and shooting through a white umbrella.  I placed this light directly camera right and raised this up really high and angled the umbrella down toward the bowl.  I took a few test shots but didn’t like the harsh shadow this single light gave on the left side of the bowl so I added a second Canon 430EXII flash in a Lumiquest Softbox III directly camera left to provide some fill light.  There is still some shadow but this is good because it provides some depth to the image.

I have certain things I really like about this shot and some things that I don’t.  But I’d like to hear from you first.  What do you like and what do you think doesn’t work well.

As mentioned above there are many different ways of making this snack with different fillers.  If you are interested in making this you can try this recipewhich uses bananas, cassava, sweet potatoes and palm fruit (we left out the cassava).  Selamat makan!