Every Monday I post a photo that is meant to inspire you, motivate you, cause you to pause and ponder, remind you of your dreams and hopefully entice you to act on whatever your goals may be. It’s August already.  Summer is flying by.  This Monday August 6th shows us the beautiful Oregon Coast.

This weekend it was forecast to be near 100 degrees in Eugene so we decided to ditch the heat and head to the coast for a day trip.  We drove to Florence and then north up the coast to Yachats where we ate lunch at the Ona Restaurant and Lounge.

When we arrived a little after noon I checked the weather on my iPhone and it showed 90 degrees in Eugene already while we were sitting at a very comfortable 68 in Yachats. 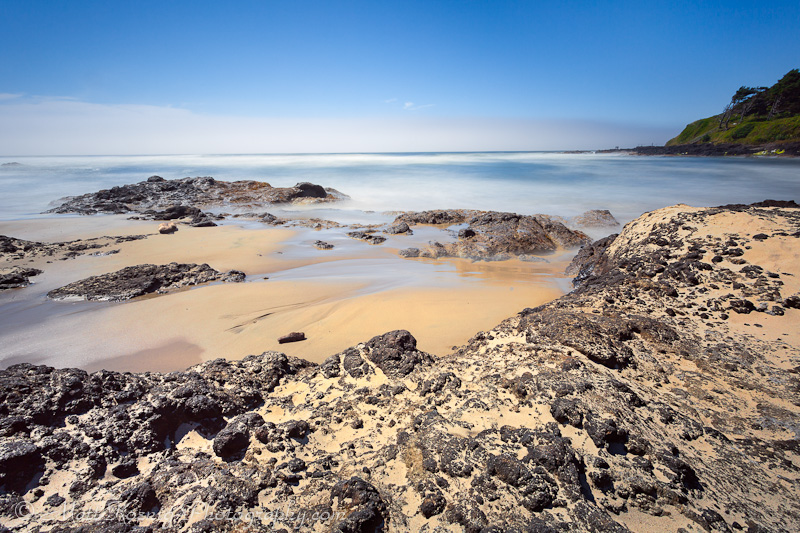 Cape Cove in the Cape Perpetua Scenic Area along the Oregon Coast just south of Yachats.

After a lunch of fresh local seafood we drove back south where we had earlier spied some nice looking beaches that the kids wanted to play on and build some sand castles.  We parked along Highway 101 and took a short trail down to Cape Cove which is part of the Cape Perpetua Scenic Area.

There is a great beach there and some tide pools.  Unfortunately we were not able to enjoy the tide pools as the tide was coming in but the kids enjoyed building sand castles, rolling around in the sand (we’re still finding sand everywhere) and running into the ice cold ocean waves.

I dipped my legs into the water and it was like sticking them into an ice brick.  How my kids could stay in that water for so long is beyond me.  I was fighting frost-bite pain after just a few minutes.  Anyway, I digress.

This shot was taken mid afternoon so the sun was quite bright.  I wanted to experiment a bit with the Lee Big Stopper and figured it would be a perfect tool to use for this situation.  With the filter in place I could aim for longer shutter speeds to blur the ocean and create the silk effect seen in this image.

I setup my tripod and attached the camera.  I’d always heard to set the image first and then attach the filter because the filter is literally a black piece of glass that once in place darkens the view finder so much that you can’t see a thing through it.

But by chance I happened to turn on Live View and was pleasantly surprised to be able to see an image and focus it with the filter in place.  This made it much easier and put my mind more at ease from the fear of dropping this expensive piece of scare glass on the rocks.

I used manual mode setting the focus manually and used the following settings: ISO 50 (for longer shutter speeds), f/18 (large depth of field) and 26 second shutter speed (proper exposure and creates the blur in the water.)

It was fun to play around with this filter and learn more about how to use it.  I’ll be sharing a few more photos I took on this trip with the Lee Big Stopper in a future post.

Until then have a great Monday!