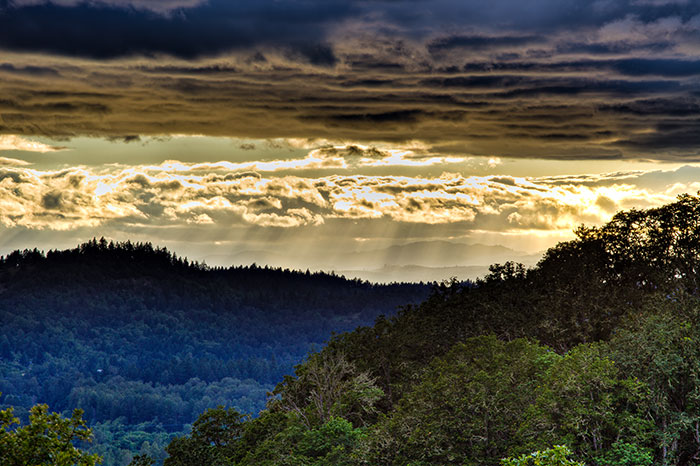 Tonight we hiked up Mount Pisgah with some good friends and caught this spectacular view of a summer storm passing through.  It looked threatening but it was all for show.  Only a few drops of rain were felt.  As the clouds were breaking up the setting sun shone through the breaks and cast it’s rays down upon the ground.

This is an HDR image made from 3 RAW files; +2.0EV, 0.0EV, -2.0EV.  I combined all three in Photomatix and tone mapped to my liking.  I then saved it off as a 16-bit TIFF and pulled it into ACR (Adobe Camera RAW) where I did some minor adjustments to contrast and sharpened it a bit.

On the way back we saw the most incredible double rainbow.  It was the largest most bright rainbow I have ever seen.  Of course these things only happen when you are driving so I wasn’t able to pull over and get a photo.  You’ll just have to trust me that it was incredible and enjoy this sunset offering.

So what do you think of this HDR image?  Are you a fan of HDR?