Today we hiked up Mount Pisgah which is a far more enjoyable activity than what I usually do on a Monday.  The weather was overcast with a few breaks in the clouds which gave way to blue skies.  It was a tough climb to the top which was a good barometer of how out of shape I am.  One at the top we had incredible 360 degree views of a fast approaching Spring storm. 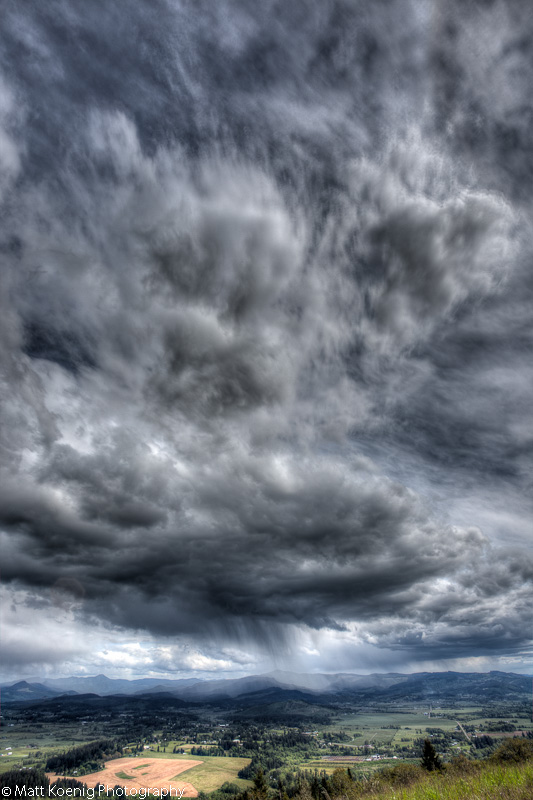 It was quite a site to see the rain falling on the distance and then watch as that wall of rain headed in our direction.  At first we didn’t think it would reach us as the wind was blowing the opposite direction but as we started our descent the wind shifted and started blowing from the direction of the storm.

It wasn’t long before the rain drops started.  At first they were few and far between but that quickly changed into a typical Spring shower. 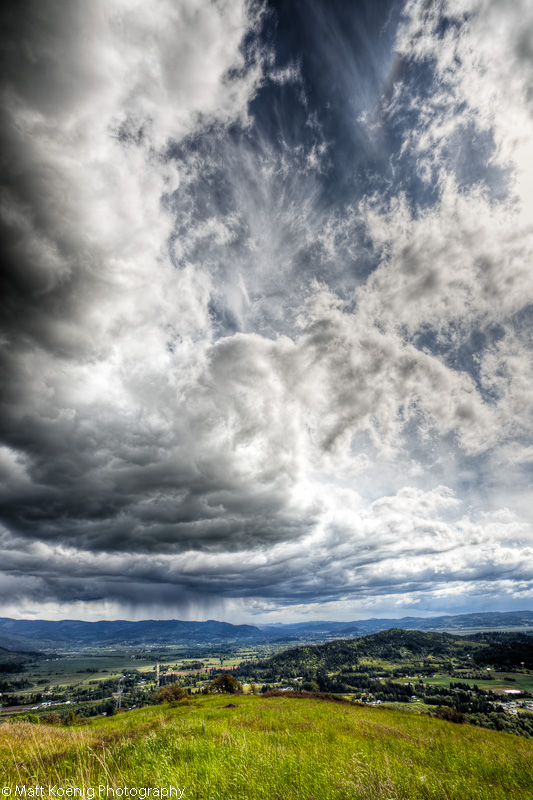 We made it to the bottom without being too wet as the showers showed us mercy.  But as we were driving away the rain began for good and now hours later the rain is incessant.  As I sit and watch the rain come down outside I realize that our timing couldn’t have been better.

These two photos are HDR images.  If you are not familiar with HDR it stands for High Dynamic Range which is a technique for capturing a greater range of luminance between the lightest and darkest areas of an image.  You see, no matter how much you paid for your camera it’s not as good as the human eye is at capturing the true dynamic range of a scene that has a great range between the dark areas and light areas such as in these images where the sky was quite bright but the foreground was darker.  It would be very difficult to capture that range in a single image.  So with HDR you bracket your exposures to capture as much of the range as you can.

In this case I set my brackets to EV +1, 0, -1.  The 0 bracket is the normal exposure, the +1 is 1 stop more exposure to bring out the foreground and -1 is 1 stop less to bring out the depth of the clouds.  Then using an application called Photomatix Pro I can blend all 3 images into a single HDR image that encompasses the entire range of all 3 exposures.

Some issues that come up are movement between the 3 images such as the grass blowing, the clouds moving etc., which the application tries to account for.  It tends to do a decent job but a better way is to blend aspects of the original images with the HDR image in Photoshop.   That way you can clean up any ghosting that occurs during the blending process.

If you are interested in learning more about HDR photography check out this post over at HDR Software on 18 Free HDR Lessons from the Pros.  It’s an excellent resource on learning the basics of HDR.

If you enjoyed this article consider sharing it with a friend. You can also stay up to date with all future posts by signing up to receive the RSS Feed.