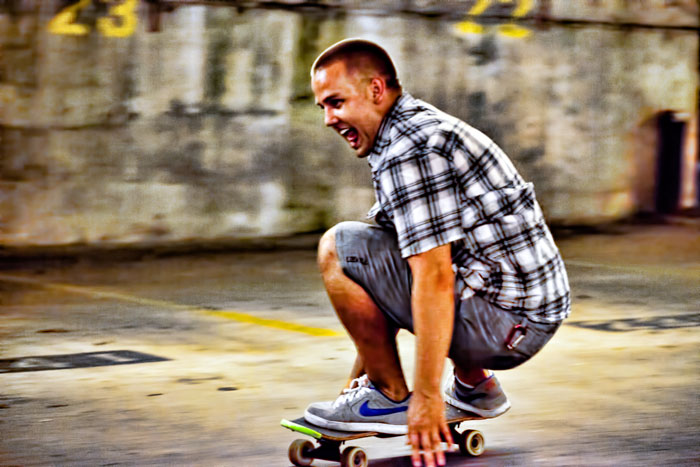 Driving home I saw a sliver of the moon.  It was really low in the sky and so bright that it lit up the rest of the moon which was glowing ever so slightly.  It was really beautiful.  I called a friend up and said “Let’s get some shots of this incredible moon!”

So he drove over to pick me up and we headed over to a parking structure that had a good view of the city, thinking that we could get some cool shots of the low moon over the city.

So we are driving and the whole time I am looking for the moon again and not seeing it.  My friend is starting to doubt that what I was telling him was the truth.  We get up to the top of the parking structure, jump out and look out over the city.  Nothing!  No moon!  It was gone, apparently already setting anf falling off beyond the horizon.

As we stood there pondering what to do next a few skaters walked up to the top of the structure and started skating down from the 5th floor.  “You guys coming back up?” my friend shouted. “Yep, we’ll be back up!” they yelled back. Sweet!  A little action shooting to  make up for the lack of a moon.

OK, so the parking structure was lit but not all that well.  I was shooting with a Canon 70-200 f/4L so it wasn’t the fastest lens on the block.  I cranked my aperture wide open at f/4 and adjusted my ISO so that I would be able to shoot with shutter speeds of a minimum of 1/125th second.  This ended up being ISO 6400 which is really high.  It wasn’t surprising that I got a considerable amount of noise in the images.  But overall it wasn’t that bad and I was able to use the noise to my advantage to create an interesting image.  These guys were a lot of fun and I’m glad they were willing to allow us to shoot them.

Here is a good lesson to follow.  Always be open to an opportunity.  We could have moped around and been disappointed that we didn’t have a cool moon to shoot.  Instead we seized an opportunity that presented itself and had a good time with it.

So don’t get down when something doesn’t work out.  Instead look for the opportunity and take advantage of it.