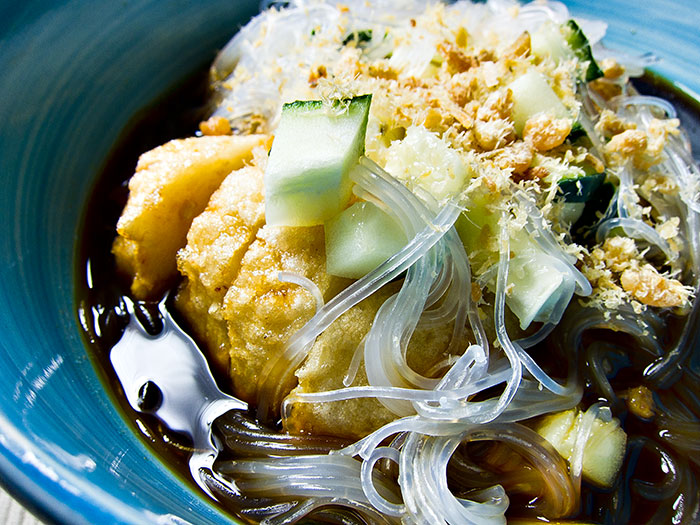 Pempek is a delicacy made from fish and tapioca. I was first introduced to this delicious food while in Indonesia.  We had friends visit us from Palembang (considered to have the best pempek anywhere) and they brought with them pempek.  I couldn’t get enough of it.

The sauce that is typically associated with pempek is sweet and tangy mixture of brown sugar, garlic, vinegar and chili peppers.  The two just go together like peanut butter and jelly.

The taste of pempek can vary considerably from region to region due to differences in the flour and fish used.  Some common types of fish used are tenggiri fish (also called Spanish mackeral), gurami fish and belido fish which some consider to be the best fish for making pempek.

The most famous type of pempek is pempek kapal selam which has a chicken egg wrapped up with the pempek dough and then deep fried (see all the good foods are deep fried).

This photo was made with my Canon S90 P&S with the macro setting turned on.  I used a single bulb lamp to light the bowl and food from the left and a bounce card on the right.  No flash used at all, just continuous lighting from a single source.