Last week I went on a shoot with my friend Renee a fellow photographer (Renascent Photography) for a local band called Coupe de Ville. They are a local Eugene band specializing in performing classic rock. They were looking for photos to use on their website and promotional materials.  I’ve never shot a band or group before and am slowly getting into portrait photography so I was really looking forward to the challenge although I admittedly was a bit terrified about it all.

When it comes to things that scare you and make you doubt yourself and your abilities my advice is to always do the things that scare you or that push your boundaries or comfort zone because that is where the most growth and learning happen. I could have easily turned down the opportunity and kept thinking that I needed to practice more but that would be giving into resistance (The War of Art).

We met up at 5th Street Public Market and we spent some time scouting out promising locations to shoot. We noticed a mix of lighting from tungsten to florescent so we knew that lighting conditions would not be optimal.

The band arrived and after introductions we got busy making photos. The first location was a stairwell that had some cool looking steps and some cool looking brick walls. The lighting wasn’t bad but I decided to use my Speedlights. I like experimenting with them and learning as much as I can and I believe that using them in real world situations like this is the best way to learn; trial by fire so to speak.  It’s all good as long as your clients are not waiting on you to figure it all out.

My setup was a Canon 580EXII with a Lumiquest Softbox III attached and a bare bulb Canon 430EXII. Firing them remotely was done with a pair of Cactus v4 wireless triggers. I like these triggers mainly for the price but they do not transmit TTL so you have to dial in your flash settings manually on the flash. But for triggers they work well and I rarely have a misfire.

So while my shooting partner held the 580EXII we set the 430EXII up behind the band at the bottom of the stairs to get some back lighting and see if we could get a cool lens flare star-burst effect. Here is the shot (after post processing) which is my favorite from the shoot. 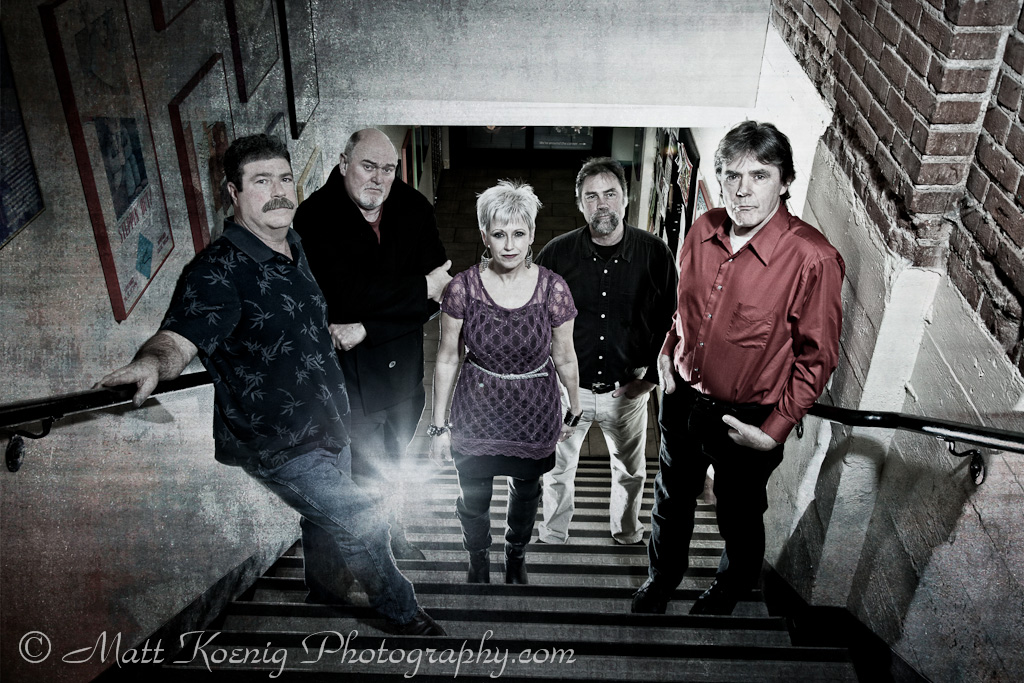 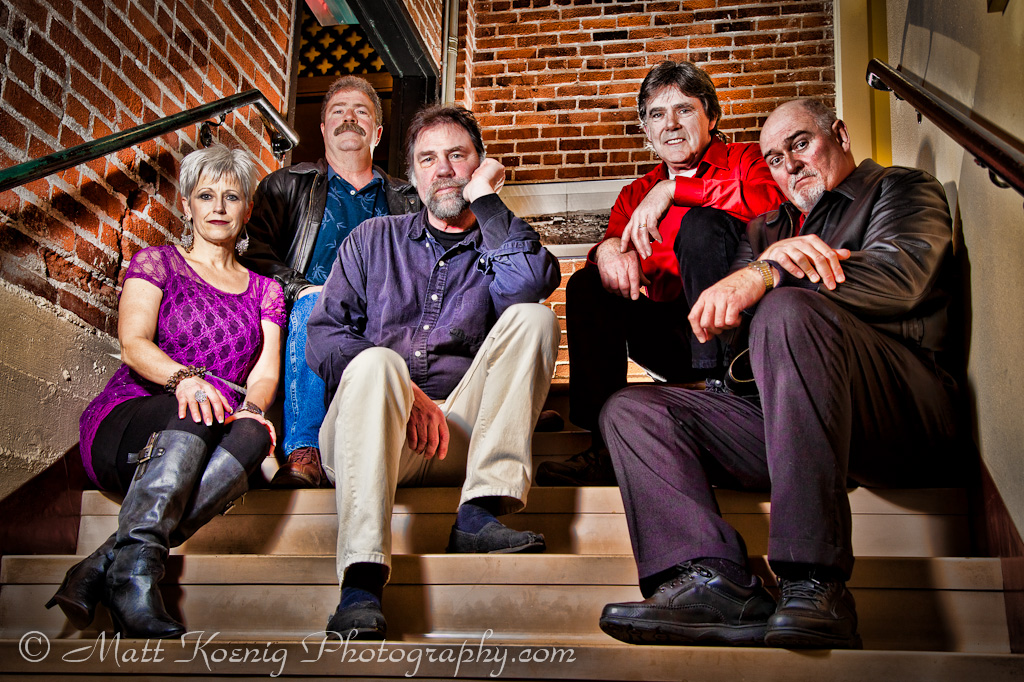 One thing about shooting up a someone is you often end up with the “bunched chin/neck” look so we really tried to avoid that.  I don’t have too much of a problem with this shot.

After this location we went over to a local hotel to shoot in a stairwell they liked.  It was an all cement stairwell but on one side had this cool and interesting glass brick wall.  We tried different poses and arrangements both on a ledge in front of the wall and down along the stairwell. 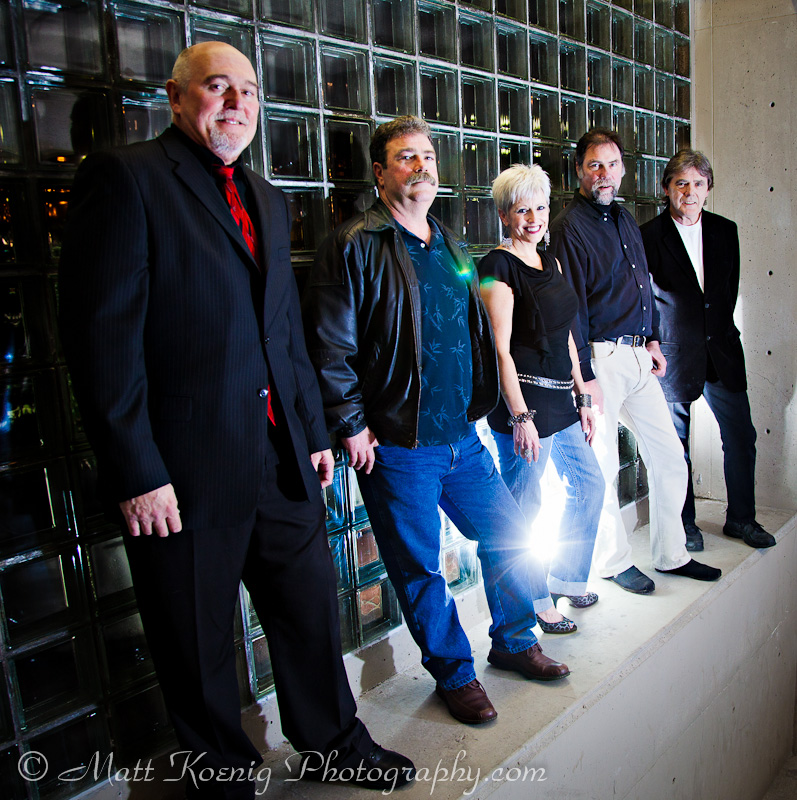 I like the glass wall behind them but am not so fond of the resulting lens flare from the flash that was placed behind them.  While we were shooting in this location the band broke out into song and with the acoustics in the stairwell it was a really cool experience.  It doesn’t get any better than doing what you love and being treated to a spontaneous performance. 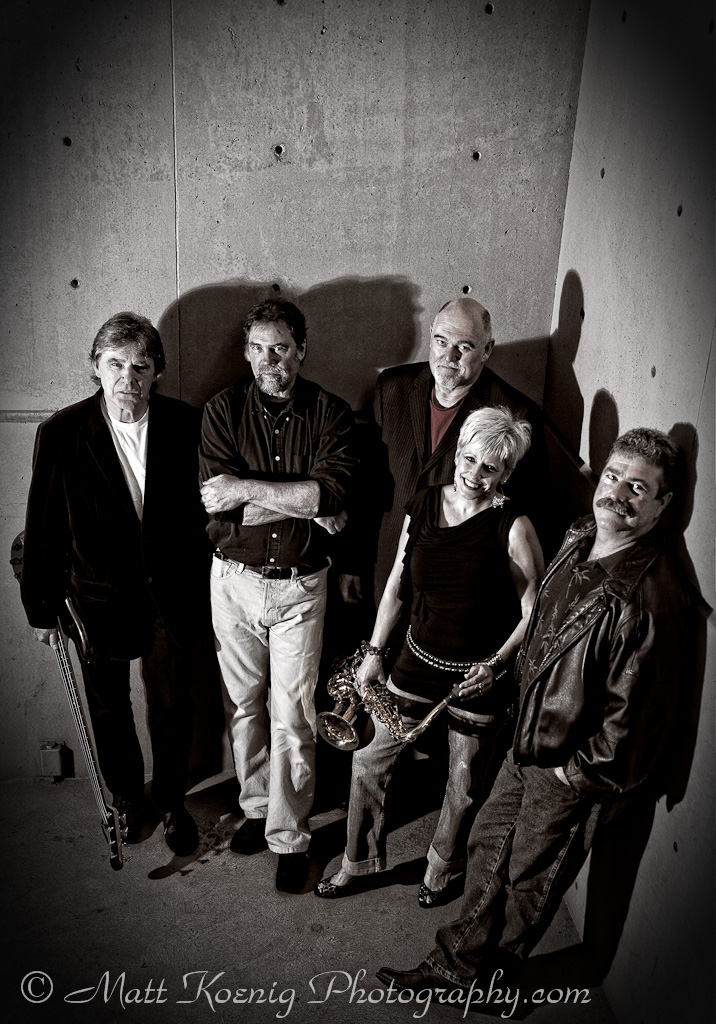 So I’m pretty happy with the results, I learned quite a bit from the experience, we all had a good time and more importantly the client loves them.  I’m now looking forward to my next shoot.

What has been your experience shooting bands or groups?  Do you have any good tips to offer up?