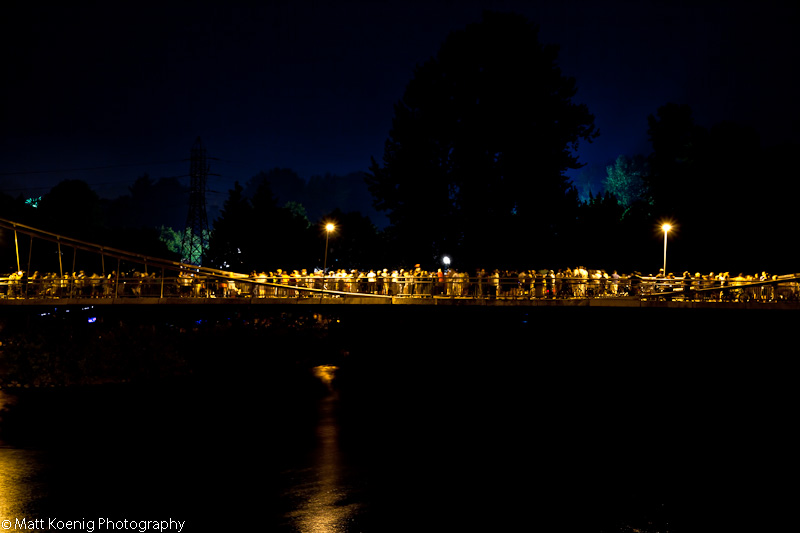 I thought I would post a few images from the 4th of July fireworks display at Alton Baker Park in Eugene.  Thankfully it was a nice warm summer evening so we walked down to the Ferry Street Bridge.  The view above is of the DeFazio footbridge and as you can see there were a lot of people waiting for the fireworks to begin.  We decided to shoot from the Ferry Street bridge just down river and while it afforded some great views of the fireworks it also offered up some challenges for shooting. 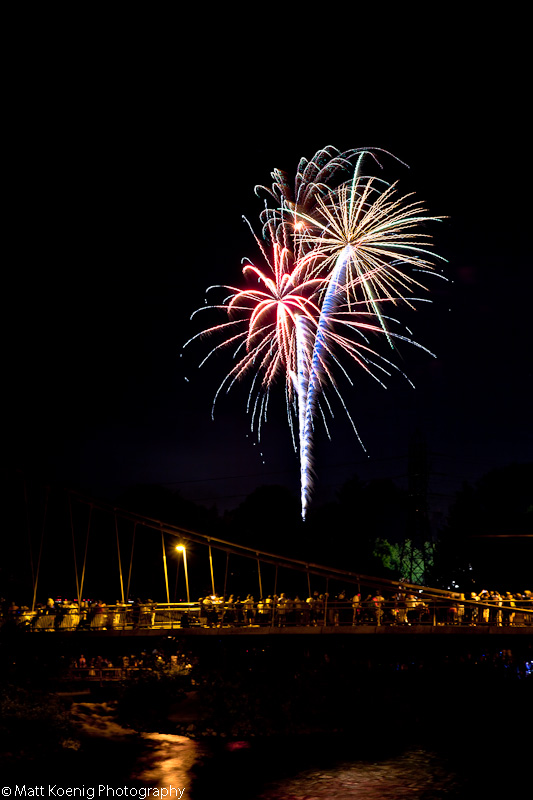 First, one would tend to think that a steel and concrete structure like a bridge would be relatively stable.  Wrong!  Every time a wave of cars would pass by the bridge would bounce up and down a slight bit.  Under normal shooting conditions this might not be a big deal but when you are shooting 3 to 6 second exposures it creates a big problem.

In some of the images you can see the problem that bridge bounce creates.  The streaks of the fireworks will not be straight but have some waviness to them caused by the camera moving slightly.  Sometimes this effect was nice and other times it was just annoying.  Also the stationary parts of the image like the footbridge were not as sharp as they could be.

To counter the bridge bounce I tried to time when I had the shutter open at times when the traffic was light.  It was typically only when several cars were on the bridge at once that I had problems.  Of course the fireworks are on their own schedule so it often wasn’t possible to coordinate the timing.

I could have moved to a different location off the bridge but I didn’t mainly because I had my family with me and I hadn’t scouted any other locations beforehand.  Plus I liked the view we had and the reflection of the fireworks and lighting on the river flowing beneath us.

The settings I used to make these images varied a slight bit.  I used a Canon 5D Mark II and a Tamron 287-75 f/2.8 lens.  I manually focused the lens but in looking at where it was focusing it was basically at infinity or just slightly backed off from infinity.  I started with an aperture of f/11 but as I experimented a bit I played around with settings that ranged from f/8 to f/16.  Those apertures are no problem when shooting fireworks because the fireworks themselves are so bright.  I varied my aperture to try and get more saturated colors. 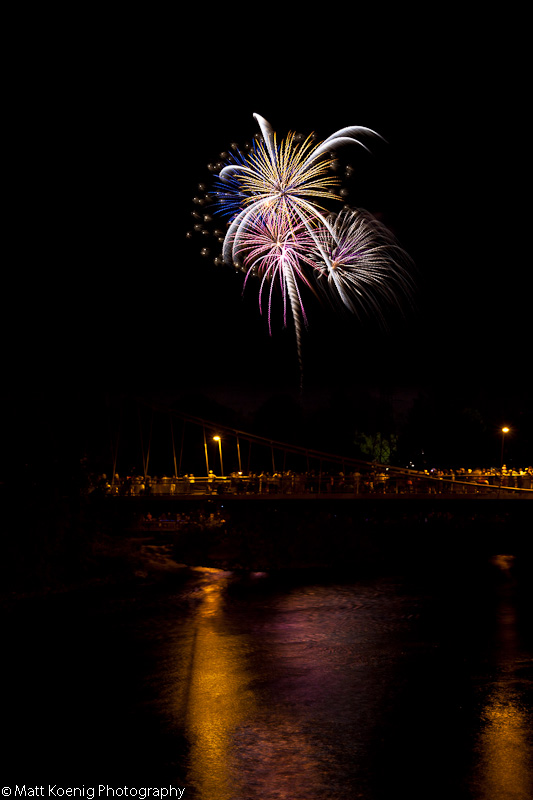 A trick I learned from an online video on shooting fireworks is to use a black card, piece of paper or a black hat to place in front of the lens, leaving the shutter open the whole time, and then removing it for the next burst of fireworks.  This way you get a multiple exposure.  I didn’t try that method this time but I’ve made a mental note of it to give it a shot next time.

You may have surmised already but I used a tripod.  A good sturdy tripod is a necessity for firework shots because of the required long shutter speeds.  Of course you can take shots without one and create some interesting shots just the same.  But if you want perfectly curved fireworks you’ll want to use a tripod.  I like using a tripod but I hate carrying it around.  The person that invents a sturdy tripod that weighs nothing and folds up to fit in a pocket will be a millionaire.

Overall I’m happy with the shots that I did get.  I had some problems with my wireless remote on bulb setting and the bouncing bridge was a problem that created some interesting effects, but overall it was a fun evening enjoying fireworks with the family.  Things I learned and would do differently next time include not shooting on a bridge and scouting out shooting locations beforehand.

How about you?  Do you have some good advice on photographing fireworks or some killer firework images to share?