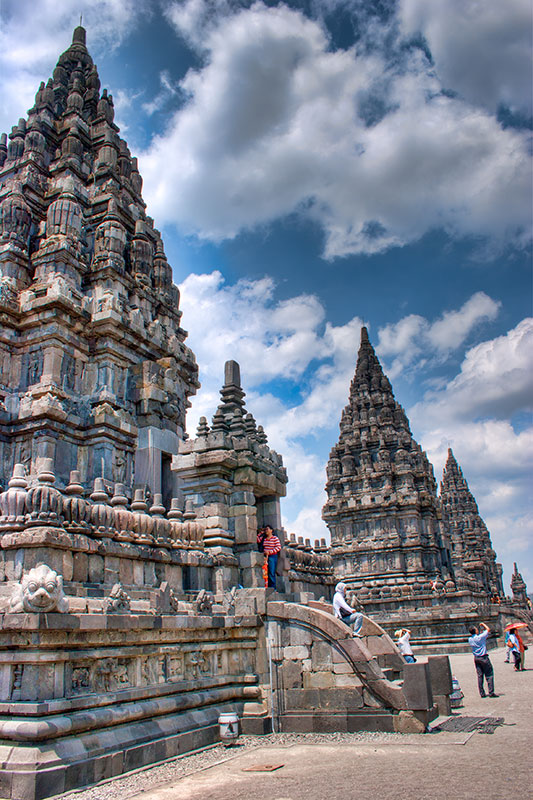 In 2005 I spent 2 months in Indonesia.  My wife and I took a train trip from Bandung to Yogyakarta and spent time exploring Prambanan.  Prambanan is a 9th century Hindu temple complex and is just incredible.  If you want to learn more about it you can check out the wikipedia page.

This photo is a pseudo-HDR image.  HDR stands for High Dynamic Range and is a photographic technique that allows a greater dynamic range than you would get through standard photographic techniques.  For example, how many times have you taken an image and then noticed that the sky is too bright and the foreground too dark?  HDR solves this by combining the large range of intensity levels into one image.

Traditionally true HDR images are made by bracketing your exposures to record the whole range of correct exposures.  If you had a scene with a dark foreground and a background of a bright sky you could take an exposure at -2.0 EV or underexposed (to bring out detail in the highlight areas), a normal exposure and an over exposure of +2.0 (to bring out detail in the shadow areas).  You would then combine all of these in a program like Photomatix and tone map the image. 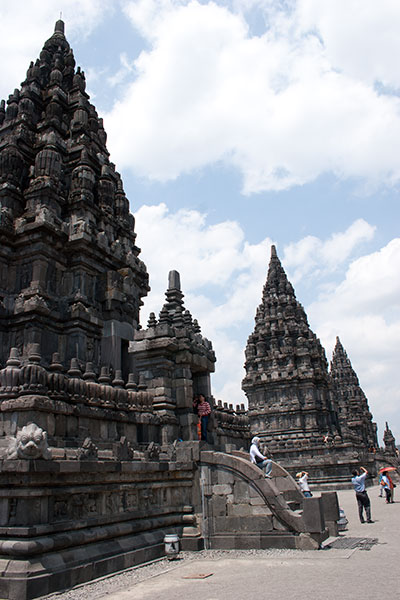 In a pseudo-HDR you would still use multiple exposures but you would develop them from a single exposure.  Using this image as an example, I took a single RAW image from a Canon 20D (see how in the original image below the clouds are too bright and without much detail and the shadow areas of the temple are dark and devoid of detail).  I then opened the RAW file up in Adobe Photoshop and using the exposure slider adjusted the exposure setting to -3.0, -2.5, -2.0, -1.5, -1.0, -0.5, 0.0 and then the same values on the positive EV side, 0.5, 1.0, 1.5, 2.0, 2.5, 3.0.  For each exposure adjustment I saved off the file as a 16-bit tiff file.  At this point I’ve basically created my bracketed exposures from a single RAW file.  Now I just pull all the RAW images into Photomatix, combine them and tone map.  I also made some adjustments in Photoshop but those topics are for another time.

With HDR you can create some extraordinary images that can be quite surreal looking.  Some people don’t like that while others love the look.  It’s not something you would want to use in every situation.

What got me interested in playing around with creating HDR images is my good friend Sean Ogle of Location 180.  He’s recently created a site called dailyHDR where he talks about HDR images and posts a fresh new HDR image every day.  It’s a really cool site with some spectacular images so I would definitely encourage you to check it out and sign up for the dailyHDR mailing to get insider guides and other free stuff.

So what about you?  Do you like the look of HDR images?