Tonight I decided to take a few photos of my son.  He was patient enough to sit for me despite really wanting to watch his brother play 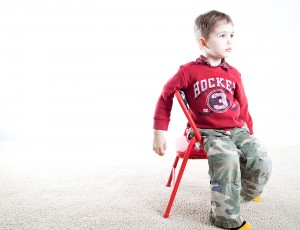 It was really hard for him to concentrate, especially because the TV was directly behind me and his eyes kept wandering in that direction.  For this shoot I was using a Canon 430EXII on full power to blow the wall out behind him.  I also had a Canon 580EXII in a shoot through umbrella to camera right.  For this particular shot I asked him to look at the umbrella.  I knew I had only a few chances before he would no longer listen to directions so I feel fortunate to have gotten this shot. 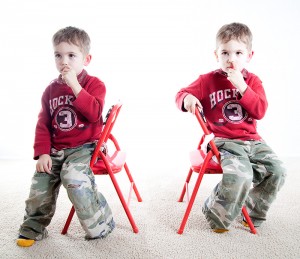 I experimented tonight with a multi-exposure.  I didn’t do one in camera however, I used Photoshop to merge two images together.  The tough part was to get the exposures the same because my lighting was not exactly even across the frame.

So I took two shots with the lighting the same, processed the RAW files identically and then brought both images into Photoshop.  I copied one image into a layer on the other and then used the eraser tool to expose the other image.  I didn’t spend much time on it and I could have done more to better blend the images together but for a quick trial I think it came out well.

For future attempts I can see how having even lighting across the frame will really make the blending easier and there are probably other techniques for merging the two images together.  I’ll be giving this another try later.