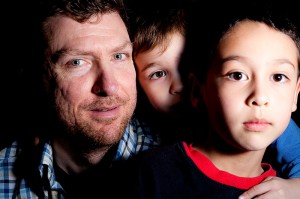 Today I thought I would take a few photos with my boys.  If you’ve ever tried to get your kids to do something they don’t want to do then you can appreciate the struggle I had tonight to get this shot.  The oldest didn’t want to take the shot at all and the youngest was shy and hiding in the back.  It’s not perfect but I like it nonetheless.

I like it because even though my kids were not cooperating they way I would have liked I was still spending time with them.  Nothing gets better than that.  Not only do I have a shot with my kids but I have the memory.