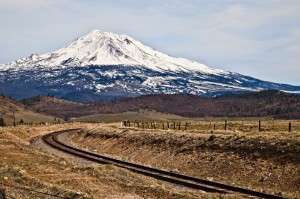 On our way back to Eugene from San Francisco we stopped to take in the view of Mount Shasta.  Passing through the small town that sit at the feet of this mountain I had to wonder what it must be like to wake up every morning to this site.

Mount Shasta is the second highest peak in the Cascades at 14,179 feet (4,322 meters).  John Muir once said of Shasta “When I first caught sight of it over the braided folds of the Sacramento Valley, I was fifty miles away and afoot, alone and weary. Yet all my blood turned to wine, and I have not been weary since.”

Mount Shasta is a stratavolcano consisting of 4 overlapping cones which include the main summit and the 12,330 foot (3,760 meter) Shastina.  The last time Mount Shasta erupted was 1786.

Driving past on I5 it looms in your path, dominating the skyline and is just a spectacular sight to behold.  This photo was taken off of Edgewood Road at the Weed Airport (also a rest area there).