For Christmas we got the kids a Nintendo Wii.  It’s been great for a number of reasons.  First, it’s great fun.  Being able to move and interact with the game through the innovative remote is really genius.  Second it’s good exercise.  I remember the day after I played Wii Sports boxing.  I was actually sore. 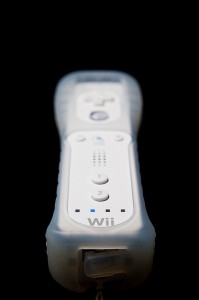 Finally the kids love it so much that it has become a good disciplinarytool.  “Eat your vegetables or no Wii for you!”  OK, maybe not the best parenting but it works and it teaches kids that for every decision made there are consequences to follow.  Sometimes they are good consequences and at other times they are bad.  It’s actually worked out quite well.  Our kids now eat broccoli.

Sometimes the Wii can be really frustrating.  For example, playing Wii tennis over and over and never winning a single game against my 3 year old son.  After 5 or 6 rounds like that I declare bedtime.

But on a serious note the Nintendo Wii has really brought our family closer together.  It’s a fun, interactive activity that we can all enjoy together.  What can be better than an evening of friendly competition in a virtual bowling alley?

For this shot I placed the Wii remote on a black background (in this case it was the black side of a 5-in-1 reflector) and lit it from above with a Canon 580EXII with a Lumiquest Softbox III.  The flash was a 1/128th power and about 1 foot above the remote.  I shot wide open and focused on the Wii logo.