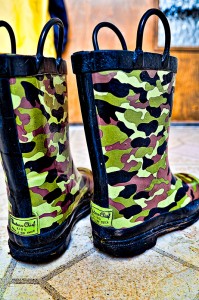 The day started out really nice with clear sunny skies and warm temperatures.  Around 5 however, the sky changed from a peaceful blue to an angry dark gray.  It’s temperament changed from calm to angry and the rain drops soon followed.

It’s been raining steady now and it doesn’t look to let up anytime soon.  I don’t actually mind the rain.  I love the clean refreshing smell after the rain and the sound of the drops falling is relaxing.  In the hectic world we live in it’s nice to take time to notice the small things and appreciate them.

What I really like is a thunderstorm.  The booming shout of thunder and the bright flash of lightning are natures show to us.  I remember the thunderstorms in Bandung Indonesia.  One in particular was just incredible.  The thunder was so loud that it shook the entire house on it’s foundation.  It drowned out every other sound.  I was in awe of nature at that moment.  At times the rain would fall so hard it was like a bucket of water had spilled from the sky.

Another storm I remember was in Eastern Oregon.  I was working for the Forest Service doing riparian surveys and I was standing ankle deep in a wet meadow with a metal auger in my hand as I watched a huge cell move into the area.  As the clouds moved in you could see the sheets of rain spilling from the clouds and making their way to the ground.  As the cell moved closer I remembered that I was ankle deep in water holding a metal object.  I quickly retreated as flashes of lightning and crashes of thunder reminded me that I am only human.