Every day on my walk I see and hear Amtrak pulling into the Eugene station.  And every time I imagine just getting on that train and heading off for an adventure with the family.  Just head out with no particular destination in mind, no expectations, just a desire to experience the freedom of travel.  How fun would it be to see new parts of the Country from the window of a train.  I visualize in my mind the passing landscape as we cruise smoothly along the steel tracks.  Then a voice calls out “Are we there yet?” quickly followed with “I gotta pee!” 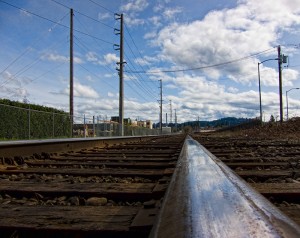 Yes, traveling with kids can be frustrating and challenging to your patience and sanity but being on the road with your kids is also an opportunity to bond and teach them some new and cool things that they would never learn in school.  There are many things that just cannot be taught, they have to be experienced firsthand.  We’ve taken a few road trips with the kids; south to Disneyland, north to Seattle.  Our biggest trip was a 2 month stay in Indonesia.  Kids love to travel and see new things.  The world to a young kid is gigantic, filled with new and exciting things.  Never squash that curiosity by rushing.

I still look fondly upon my own adventure in the southwest part of the US.  I had just finished up a seasonal job with the BLM and decided to pack up the truck and hit the open road.  I had an idea of a few areas I wanted to see but I discovered that the most exciting areas were not the primary areas I planned to visit but the areas in between.  Places like Valley of Fire State Park which I stopped at on the way to Zion, a small little wayside camp ground on my way south toward Organ Pipe Cactus where I spent a day hiking up an arroyo and spotted wild burros.

The trip isn’t the shortest distance between two points, it’s every mile between the two.  Take the time to stop and explore.

For Day 6 of Project 365 I used my Canon S90 and took a shot looking down the railroad tracks here in Eugene.  You can almost hear the sound of the train.