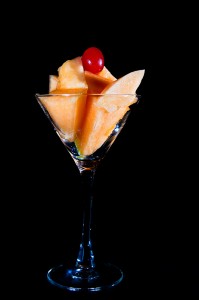 One thing I really dislike about buying fruit is the hit and miss quality of it.  This pertains more to the produce we buy in the supermarket than the good stuff we get locally at the farmers market.  But we took a chance on some cantaloupe from Costco.  We’ve been trying to buy more local organic produce that is in season but these cantaloupe were calling.  As it turns out they were perfectly ripe and so sweet and juicy.

For this photo I placed some pieces of cut cantaloupe in a martini glass and topped it with a cherry.  I used a 5-1 reflector on the black side for the background and placed the glass on the back of an old stereo speaker.  I then used 2 flashes triggered with Cactus v4’s.  The first flash was a Canon 430EXII and was placed about 2 feet directly right of the camera and in line with the glass.  It was set to 1/32nd power.  The second flash was a Canon 580EXII with a paper snoot handheld above and slightly camera left and fired at 1/32nd power.  Also camera left I had a white paper reflector to help fill in a bit more.  The camera settings were: