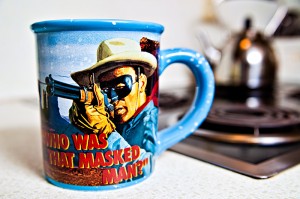 For my birthday my Mom got me this cool “Lone Ranger” camp mug that is perfect for drinking my morning tea. So “Who was that masked man?”

The Lone Ranger conducted himself by a strict moral code:

“I believe…..
That to have a friend, a man must be one.
That all men are created equal and that everyone has within himself the power to make this a better world.
That God put the firewood there, but that every man must gather and light it himself.
In being prepared physically, mentally, and morally to fight when necessary for that which is right.
That a man should make the most of what equipment he has.
That ‘this government of the people, by the people, and for the people’ shall live always.
That men should live by the rule of what is best for the greatest number.
That sooner or later…somewhere…somehow…we must settle with the world and make payment for what we have taken.
That all things change but truth, and that truth alone, lives on forever.
In my Creator, my country, my fellow man.”

Reading this I can’t help but think what kind of world we could have if everyone lived this creed.

What if we were actually a true friend to everyone that crossed our path?

What if we really believed, and not just believed, but actually acted as if all people are created equal?

What if we believed that each and every one of us has the power to make a difference in this world?

What if we believed that it takes hard work to get by in life and that there are no shortcuts?

What if each and every one of us stood up when we saw an injustice and fought long and hard with everything we had to make it right?

What if each of us used our God given talents to make a real difference?

What if we really had a government that was of the people, by the people and for the people?

What if instead of living our lives to gain what is best for our self, we set out to do things that benefit the whole of mankind?

We need more Lone Rangers who believe in and live this creed.  Is one of them you?