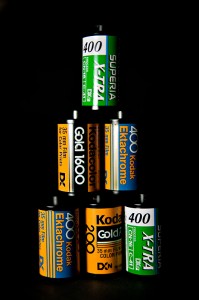 Today I was digging through some old boxes, not looking for anything in particular, just looking around aimlessly.  Actually I was hoping to find something interesting to shoot tonight for Day 7 of Project 365.  Down at the bottom of this old box were 6 canisters of spent film.  I have no idea how old they are or even what is on them.  I haven’t shot film in over 10 years so I know they are at least that old.

The only film camera that I have ever owned was a Pentax Me Super.  It was my very first camera and is what really got me interested in photography.  Now that I have uncovered these mystery rolls of film I am curious about what secrets they may hold.

I remember attending a local community college and signing up for a photography class that involved developing and processing your own B&W film.  We used these light proof black bags to take the film out of the canisters and roll them around steel wheels and secure them in a light proof containers with a lid that allowed the developing chemicals to enter.  After processing the film I could then head into the darkroom and make some prints.  I could spend hours in there.  The time seemed to go by so quickly and I would easily forget about the rest of the world and get lost in printing and developing images.  I remember that there was a 2 hour limit but if someone didn’t show up you could take their spot.  I’m a bit ashamed to admit that I would at times sign up for the time after mine with a fictitious name just so I could spend an additional 2 hours making prints, experimenting with dodging and burning and all the other stuff that you can now do so easily and chemical free in Photoshop.

So I think tomorrow I will head down and get these six mystery rolls developed and we’ll see what they reveal.  I think this mystery has waited long enough.  Hopefully 10+ years of sitting in a box will still yield some results.