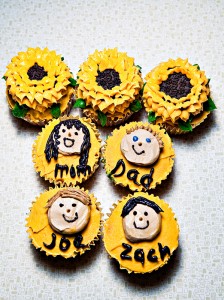 For my sons birthday today my wife made cupcakes for each of us.  We’ve got Mom and Dad and the two boys Zach and Joe.  I’m the only one in the family with blue eyes.

So my son only wanted two things for his birthday: a tank and a Wii game.  So we got him a tank from Toys-R-Us with moving tank treads and a Lego Indiana Jones Wii game.  Both boys have been playing that game for hours now.

This was also our 9 year wedding anniversary.  My nephew watched the boys while we went out to a Moroccan restaurant here in Eugene called Cafe Maroc.  They serve cuisines of North Africa focusing on Morocco, Turkey and Lebanon.  The atmosphere is really cool with an area where you can sit on pillows low to the ground or traditional tables.  Every night there are belly dancers who put on quite a show and get the women in the audience involved.  The dancer really added to the atmosphere of the place.

The food was fantastic.  My wife ordered the local Anderson Ranch Lamb while I had the Deck Family Farm Goat Za’atar.  The entrees were really tasty.   We did the full 5 course Riad Palace Dinner which included an appetizer of seasoned olives and hummus, lamb harira soup, a salad of grated carrots in rose water and pickled beets, our entree and finally baklava with almonds and vanilla infused honey.  It was all really good.  The most interesting dish was the rose-water carrots.  It had a really unique taste to it and was really good.

The food was really good and so was the service.  We will definitely go back again not only for the food but for the experience.