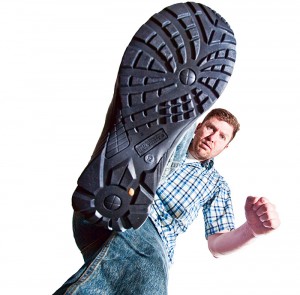 Got some new shoes today.  I put this in the category of a necessity as my old ones were falling apart and hurting my feet after a day of walking around.  Payless Shoes had a buy one get a second pair half-off sale which seemed like a good deal.  Now I should be set on shoes for quite some time.  I got a year and a half out of this last pair.  I guess I am a bit frugal.

For this shot I used a Canon 5DII with a 17-40 f/4L to get a super wide angle look.  I had a Canon 580EXII with a shoot through white umbrella that was camera right as well as a Canon 430EXII with a Lumiquest Softbox III on the floor aiming at my shoe.  I shot both at full power.  To get this perspective I placed the camera on it’s back so the lens was facing toward the ceiling and simply stood over the camera and pretending like I was going to step on it.

In Photoshop I used Topaz Labs Remask2 filter to mask my image and then create a totally white background.  Using the mask tool I traced around my image, then basically “cut” it out and placed it on a white background.  The process is a little more refined but that is the gist of it.  This was the end result.