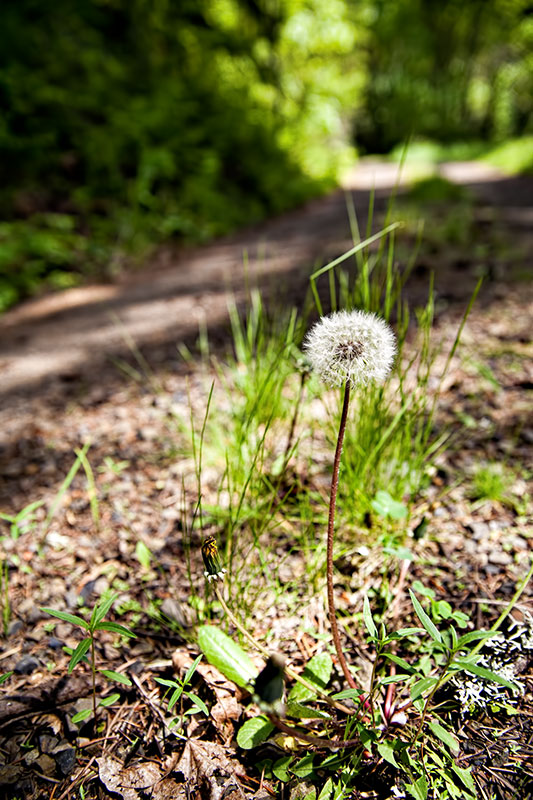 Two roads diverged in a yellow wood,
And sorry I could not travel both
And be one traveler, long I stood
And looked down one as far as I could
To where it bent in the undergrowth.

Then took the other, as just as fair,
And having perhaps the better claim,
Because it was grassy and wanted wear;
Though as for that the passing there
Had worn them really about the same.

And both that morning equally lay
In leaves no step had trodden black.
Oh, I kept the first for another day!
Yet knowing how way leads on to way,
I doubted if I should ever come back.

I shall be telling this with a sigh
Somewhere ages and ages hence:
Two roads diverged in a wood, and I–
I took the one less traveled by,
And that has made all the difference.

I love this poem by Robert Frost and this image today made me think of it.  Some say it is about individualism and others say it is a somewhat mocking satire of a walking partner of Frost’s who wondered what would have been had he chosen a different path.  To me it makes me think of my years as a wildlife biologist hiking the woods of the Oregon coast exploring the mysteries of nature.  Whatever your path may be make sure it is the one you really want to be on.

Today was an awesome day of travel.  We hit the road early heading for White Salmon Washington to visit my good friend Mark who bought a house there.  The drive between Eugene and Portland was pretty much as expected and it wasn’t until we merged onto the 84 heading east that we started to see some cool scenery and geology.  The rock faced structures towering over the Columbia River near Rooster Rock.  There are several incredible falls along this stretch of highway including Latourell Falls, Shepperd’s Dell, Bridal Veil Falls, Wahkeena Falls, Oneonta Falls, Horsetail Falls, Elowah Falls and of course Multnomah Falls which plummets 620 feet and is simply spectacular.

We drove on toward Hood River and then crossed over the Hood River – White Salmon Interstate Bridge (which has a 75 cent toll both ways so pack some quarters) and crossed over the mighty Columbia into Washington.  White Salmon is a small town, the kind where if you blink you would never know you passed through it.  After several mis-turns and missed phone calls for directions we arrived at Mark’s house.  He is fortunate to be able to live and work from this place as the view is incredible.  The front of his house is nothing but large glass windows that gaze upon a spectacular view of Mount Hood with the Columbia River in the foreground.  It’s simply spectacular.  The place is offset from the main road and surrounded by nature.  What a joy it must be to wake up every morning to that incredible view.

Mark is an avid kite surfer (kite boarding) and if you have ever been down near the Columbia River in the afternoon you know that the wind can really blow.  The Hood River/White Salmon are offers some of the best windsurfing and kite sailing around.  One of these days I’ll give it a try as well.  Living where he does affords him plenty of opportunity to practice and enjoy the ride.

I really like what Mark has been able to do.  He’s worked hard to set his life up with the things that make him happy and he’s doing the things he’s passionate about.  He’s chosen the road less traveled and that has made all the difference.