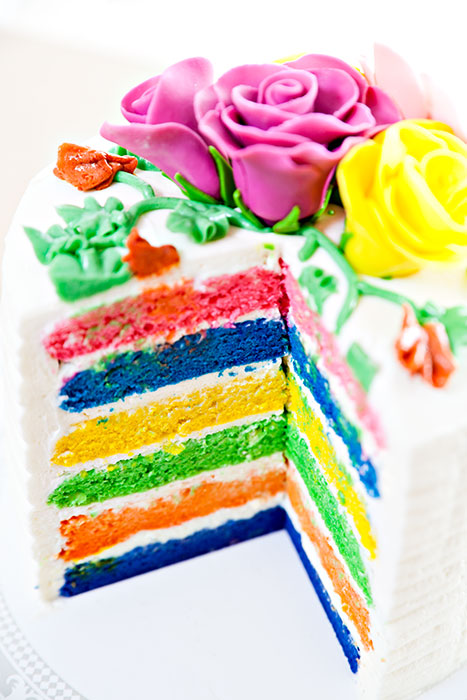 I like rainbows and I like cake.  So a rainbow cake is even better.  This rainbow cake is made of layers of colored sponge cake and cream cheese frosting, decorated with gum paste roses.  It was delicious!

To take this photo I used a Canon 5DII and a Tamron 28-75mm lens zoomed to 75mm.  I really wanted to show off the colorful layers of the cake so I focused on one side of the cut and really zoomed in as much as I could while still being able to show that this was indeed a cake.

I used an aperture of f/5 which gave me a fairly shallow depth-of-field.  I used a shutter speed of 1/125th second.  My ISO was set to 100.  I used manual mode on the camera so that I could adjust aperture and shutter speed independently of each other.

As you can see from the setup shot below I used 2 speed-lights, a Canon 580EXII with a white shoot through umbrella and a Canon 430EXII.  The 580EXII and umbrella provided a nice diffuse low contrast light which reduces the potential for harsh shadows and provides a nice even light.  The purpose of the 430EXII was simply to blow the white wall out behind the subject.  It provides a nice even bright white background.  I set the 430EXII at full power because I didn’t care how much light hit the wall as I just wanted to create a perfectly white background.  With the 580EXII in the umbrella I took a few test shots before I settled on a setting of 1/8th power. 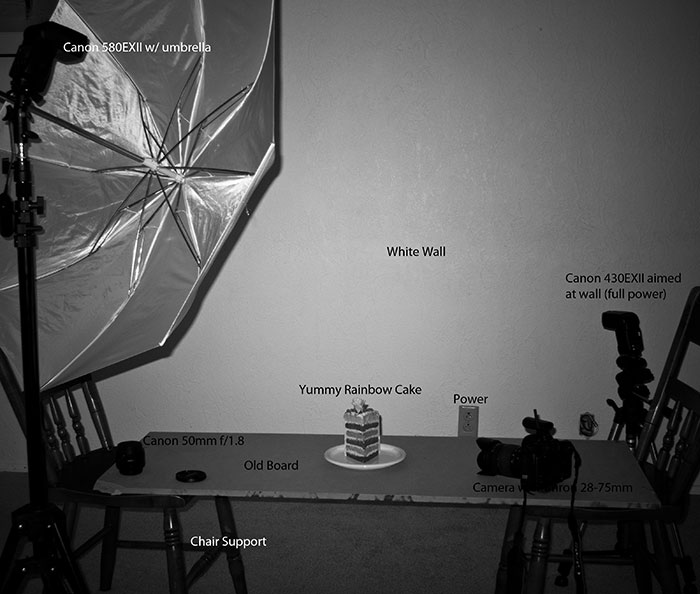 My stage was simply an old board laid between two chairs.  It’s a low budget setup that anyone can do.  Use some old boards, a table, a chair, whatever you have laying around.  If it works then it’s good.

I’m happy to answer any questions regarding this photo and the setup.  If you have comments or suggestions to improve the shot I’d love to hear from you.