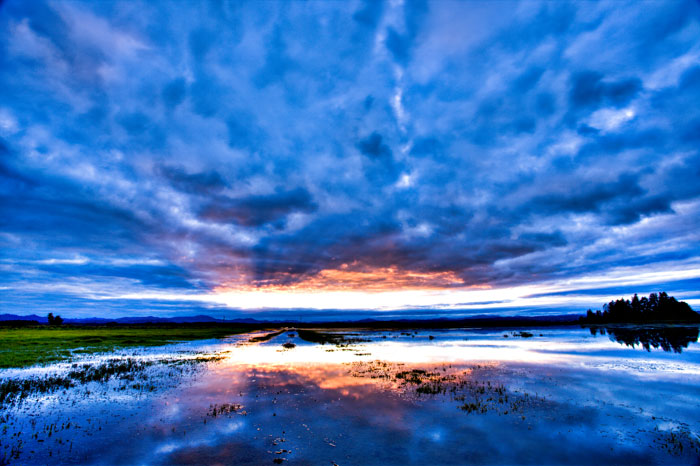 I took my boys out to Fern Ridge lake tonight to watch the sunset. Driving out I wasn’t really expecting much as there was quite a bit of cloud cover.  But as we walked in toward the lake there were a few breaks so I was hopeful.  While it wasn’t a spectacular sunset it was beautiful nonetheless.

I was shooting with a Canon 5D Mark II and a Canon 17-40 F/4L lens.  With the camera on a tripod I bracketed my shots with -2ev to +2ev exposures.  I did this because I wanted to capture the entire dynamic range of the shot.  If I were to expose for the sky the shadow areas would have been too dark.  If I were to expose for the shadow areas the highlights would be blown out.  By bracketing the shots I knew I could combine them together later into an HDR (High Dynamic Range) shot.

Using Photomatix software (which is an HDR software) I combined and tone mapped all 3 bracketed images into a single HDR image.  What you see here is the result of that.  If you want to see some absolutely spectacular HDR images check out Trey Ratcliff site Stuck in Customs.  He’s got a nice free online tutorial for creating HDR images.

As we walked back to the parking area I noticed that the gate was closed.  Thankfully they had just put the pin in the gate and not locked it.  The signs say the park closes at dark but apparently they really mean dusk as there was still another 45 minutes until I would consider it dark.  I’ve got a few more images from this evening that I will work on and post at a later date.  Until then keep shooting!