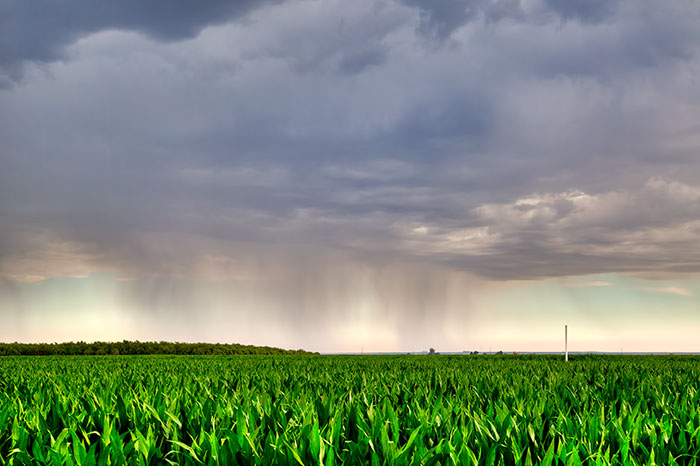 On our drive back from California to Oregon we came upon this Summer thunderstorm.  This was near Stockton and as we approached we started seeing lightning strikes.  Some of the lightning struck the ground and others were spread out like veins across the darkening sky.  It was really very cool.

As we approached the storm (or maybe it was the storm approaching us) the sky darkened but off in the distance we could see where the storm ended and there was blue sky once again.  Looking out over some farm land we saw the rain falling like a curtain in several areas.

I wanted to get a photo of this so we pulled over at a rest area and I walked over to an area that turned out to be a giant field of corn.  This was the image I captured.  During this whole time of taking multiple shots of the scene the thunder rumbled and roared above us but the only rain that fell was off in the distance.

This is a pseudo-HDR shot.  I used a single RAW file to create multiple exposures of -2.0 – +3.0.  I then combined them all in Photomatix Pro and tone mapped to my liking.  I really like how this one turned out.  It looks exactly like how I remember the scene.

I don’t know about you but I really like a good thunderstorm.  We don’t get many at all in Western Oregon but when we do I enjoy the flash of the lightning and the boom of the thunder.  The fresh smell that occurs before and after the pouring rain is so refreshing.  How about you?  Do you enjoy a good thunderstorm?