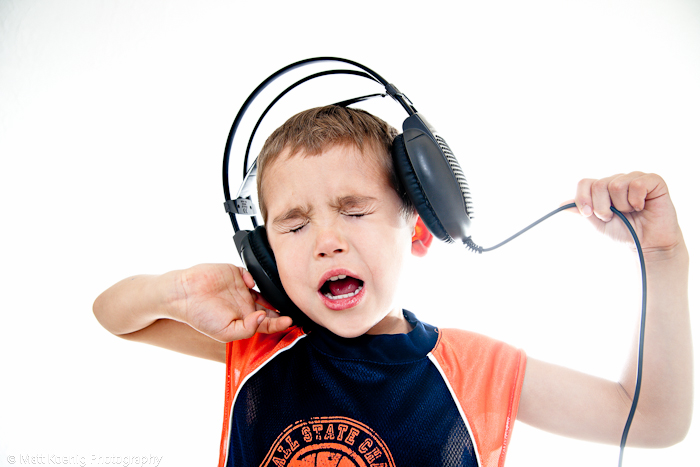 I really enjoy photographing my youngest son.  Between my two sons he is the one that is the most patient and indulgent with me.  Tonight we decided to mess around with some headphones.  My original intent was just to get some funny shots of him with these giant headphones on his little boy head.  But then we decided to take a few with him pretending the music was really loud.  He was doing a great job but then he got bored.  It doesn’t take 4 year old much time to get bored unless they are playing a video game and then there is no such thing as boredom.  But I digress.  So I could tell that I wasn’t going to get many more shots so I snapped a few more and during the very last shot of the session he made his “Too Loud!” face and started to take the headphones off.  This was the shot we captured which I think is pretty cool.

Here is a lesson I learned tonight.  Never put your camera down.  Keep shooting all the way through.  Had I given up and put the camera down at the end I wouldn’t have captured this shot.  So keep shooting even if your subject is done.  You might just get the shot you were looking for.

No animals were harmed in the making of this shot.  The headphones were not plugged in and therefore were not making any sound.  It was all pretend.