I’ve visited Indonesia on multiple occasions and each and every time it is such a rewarding experience.  The people and culture are always so welcoming you can’t help but to feel at home there.  So I thought I would put together a list of my Top 5 Favorite and Most Memorable places I have personally visited in Indonesia.

Bali was voted the World’s Best Island in 2009 (#1 six years running except for 2008 when it was #2 on the list) and there is a reason for that.  It is an island complete with fantastic beaches, warm waters and lush tropical forests.  The people are some of the most welcoming and friendly people I have encountered anywhere.  And if you like to eat (most people do) you will love the rich variety of food and fresh fruits and vegetables.  Bali is mainly Hindu so there are lots of amazing temples to visit and explore.  Four of my favorites are: 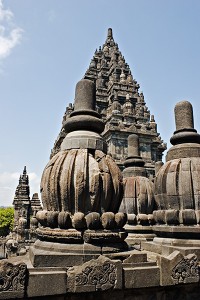 Prambanan is the largest Hindu temple in Central Java and was built in the 9th century.  It is located about 18km east of Yogyakarta.  It is absolutely spectacular so it is not surprising that it is a UNESCO World Heritage Site.  I was there in 2005 and I understand the temple was damaged by the 2006 earthquake that struck the region and I am not certain that visitors can go through the inside of the temples as I was able to do in 2005.  Photos cannot do justice to the sheer size and design of this temple complex.  Go with a tour guide that is provided because they offer so much historical information that you would never get anywhere else.  Our tour guide was amazing and we got so much more out of the experience thanks to him.  The temple complex is comprised of three zones; the outer zone, the middle zone (which contains hundreds of small temples) and the inner zone which is considered the most holy and contains the eight main temples and smaller shrines.  There are carved relief panels around the Brahma and Vishnu temples which depict the story of Ramayana and the detail is just incredible.  When I return I want to take some night shots of Prambanan.  I understand that between May and October there is a ballet performance of the Ramayana at a theatre with the temple lit up as a backdrop.  I’d love to photograph this spectacular event if I can time it right.  If you get the opportunity to see Prambanan in person don’t pass it up. 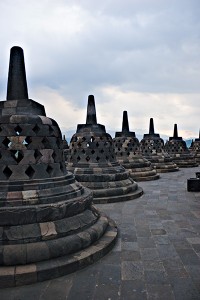 Borobudur is another UNESCO World Heritage Site having been built over a 75 year period in the 8th century.  It is a Buddhist monument located in Magelang in Central Java.  The monument is basically six square platforms on top of each other and then topped with three circular platforms.  There are 2,672 relief panels and 504 Buddha statues with the top platforms surrounded by 72 Buddha statues in stupas.  The narrative panels tell the story of Sudhana and Manohara.   Its sheer size is just amazing.  When I was last there it was late in the day just a few hours before closing and I got the opportunity to take a few sunset photos from the top.  I suggest arriving earlier in the day and spending more time to do the full walk around all levels.  Next time I want to do the sunrise tour which allows you to enter the temple gates at 4:30 AM in time to see the sunrise and be able to explore the temple for an hour and a half before the crowds arrive.  Also, as with Prambanan make sure and hire a guide.  It is well worth the money which at the time was Rp 50,000. 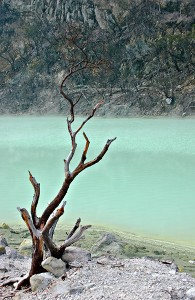 Kawa Putih or White Crater is located about 50km south of Bandung City on the foot of Mount Patuha.  The drive up to the crater meanders uphill for several kilometers and seems to keep going up and up.  The views from the ridgeline of the valleys below is spectacular although at times there was fog obscuring the view.  Once you arrive at the parking area it’s a short walk up some stairs and then down the other side to the crater.  The first thing you will notice is the strong smell of sulfur.  In fact as we crossed near what appeared to be a small cave on the side of a cliff face I actually couldn’t breathe because the smell was so strong.  I am not sure if it was due to sulfur or some other volcanic emission but it really burned my eyes, throat and lungs.  I’ve read that at times the sulfur content can become so strong that they have to close down the crater. The crater is surrounded by steep rocky cliffs that meet up with steaming milky turquoise colored lake water.  The trails of steam rising off the water give the place a magical appearance.  The color of the water can change dramatically depending on the sunlight. 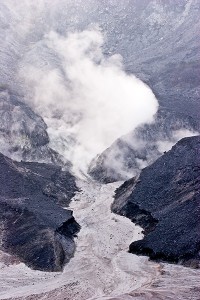 Tangkuban Perahu is an active volcano located about 30km north of the city of Bandung.  You can drive right to the edge of the crater, park and explore the area.  On the drive up you pass through scrawny pine forests that I found interesting because the bark near the base was cut and sap was oozing everywhere.  I never did find out what was going on with that.  On this particular day the forest was infiltrated with wispy fog and a strong smell of sulfur.  When viewed from a distance the volcano has a shape of an upturned boat which is precisely what Tangkuban perahu means and is expressed in the legend of Sangkuriang.  There are three craters which can be explored: Kawah Ratu (Queen Crater), Kawah Upas (Upas Crater) and Kawah Domas (Domas Crater).  You can walk down to Kawah Domas to see the hot geysers but this area was closed when we were there.  I had heard that the entire volcano was closed off just a few weeks before we were there due to fear of an eruption.  It is quite amazing to be standing on the rim of an active volcano looking down into the steaming and smoking center.  This is definitely a place to check out.  I can’t wait to go back and see some of the other craters.

So those are the 5 locations in Indonesia that rocked my world.  Of course there are so many other incredible places in Indonesia but these are the ones that really stuck in my mind as beautiful and inspirational.  If you ever get a chance to visit Indonesia make sure and put these on your “to see” list.  You won’t be disappointed.

If you’ve been to any of these locations leave a comment on your experience or feel free to contact me directly with your story.