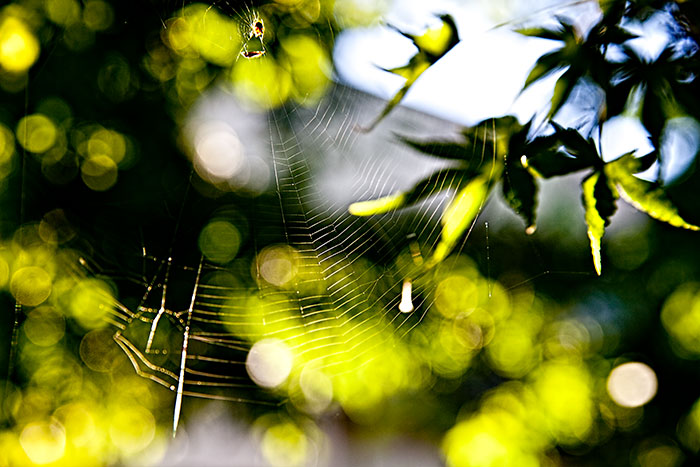 This morning I woke early and enjoyed the sun shining through our Japanese Maple tree in the backyard. As I gazed out through the window I noticed the light also illuminating a spider web.  So of course I had to photograph it.

As I made my way outside into the sunshine with sleep still in my eyes I quickly realized that there were more than just this one spider web out there.  In fact there were many.  I tried to bog and weave my way through the obstacle course but as luck would have it I got a couple big webs wrapped around my head and face.  There is nothing worse than that creepy feeling you get when you get a web in the face.  Your first instinct is to flail around swatting at the air in the hopes that these frantic moves will scare the small spider away.  No matter whether you get the web out of your hair and off your face you are always going to feel a spider crawling through your scalp.  Despite my creeped out feeling I made it to the web I had chosen to photograph.

The sun was just perfect and I shot a few until I was happy with the result.  What I was going for was capturing a nice back light on the web and since I was using a small aperture I got some great bokeh as well.

As I made my way back to the house I noticed that all the spiders whose webs I had trashed with my face and big head were busy building them back again.  And that’s when I started thinking that maybe we should all live a little bit more like spiders.  No I don’t mean that we should cling to peoples faces and creep them out (although that could be cool as well).  What I mean is that here these spiders built these webs to catch their food that in turn nourishes them and provides them life, and they just had them completely destroyed.  And yet they went right back to work building them up again.

It’s no secret that it take hard work to realize our dreams.  But how many times have we just let our dreams die because someone told us they were impossible, their words slicing through our dream like a stick through a web, and that opened the door to the voices of doubt in our head?  How many times have we had our dreams ripped to shreds, destroyed in an instant; and rather than pick ourselves up again we give up and never rebuild them?

But what if we lived more like the spiders and whenever someone tells us our dreams are impossible; whenever someone laughs and says we’re crazy, instead of letting our broken web lay there tangled on the ground we picked the remains up and rebuilt it?  Maybe, just maybe as we rebuilt that dream piece by piece and strand by strand we’d find that we end up catching the very thing we were dreaming about.

Are you actively building your dreams?